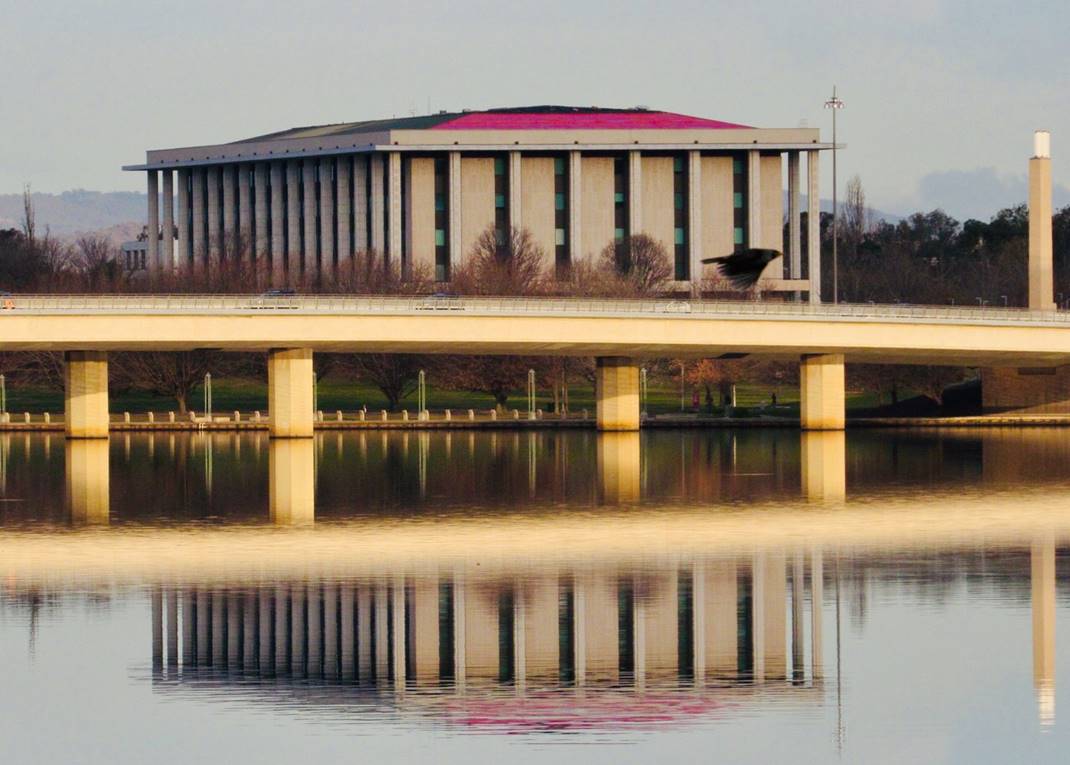 The National Library’s normally grey and white exterior will feature a bright orange boost over the coming weeks.

More than 3000 square metres of bright orange sheeting will be laid across the library’s copper roof to allow for repairs to be carried out to areas damaged by January’s freak hailstorm.

The sheeting, which was brought up to the roof on Wednesday, will take 10 days to install before repair work can begin.

Once the sheeting is installed, it’s expected the roof repairs will take up to 12 months to complete, weather permitting.

The library’s director of capital works, Erin Dampney, said the damage to the roof was extensive.

“We had hail damage across the entire roof and you can see the direction where the hail travelled in from,” Ms Dampney said.

“We have taken time to do emergency repairs and fill some holes and we got protection in place, but given the size of the roof, it couldn’t continue like that.”

Large hail dents are visible across the entire roof of the National Library, many with holes several centimetres in diameter.

Grates on top of the roof have also been severely damaged by the hail.

Matthew Lennox, the managing director of Stormseal, the company behind the sheeting, said it would be a large undertaking.

“It’s not the biggest job we’ve done, but from a national-importance perspective, it’s the most prestigious job, I guess,” Mr Lennox said.

“Having a copper roof is very unusual in this day and age, and the National Library being 50 years old and a national treasure, the replacement will take time.”

While the south side of Canberra became a sea of bright tarpaulins in the wake of January’s hailstorm, which led to more than 37,000 insurance claims being made, the sheeting covering the National Library will be more than just a humble tarp.

Mr Lennox said the material is a polymer sheeting heat-shrunk to fit over the affected areas to make sure it doesn’t come loose or fly off in strong winds.

The same materials have been used at other institutions across Canberra following the hailstorm, including buildings at the Australian National University.

“We did a lot of work at ANU that kept students in their accommodation,” Mr Lennox said.

“One of the buildings was at University House where all of the travelling professors stay, and that’s an important building.”

The library reopened to the public on June 3, following the easing of coronavirus restrictions, but with a limit of 20 people in each separate space.

Parts of the library’s collection in areas that may have been susceptible to further roof damage have also been protected.

Ms Dampney said there would be some disruption for library patrons while repair works were being carried out.

“We’ve been undertaking careful planning to keep the disruption to a minimum,” she said.

“It’s a heritage and iconic building, and we wanted the replacement for the roof in keeping with that heritage.”