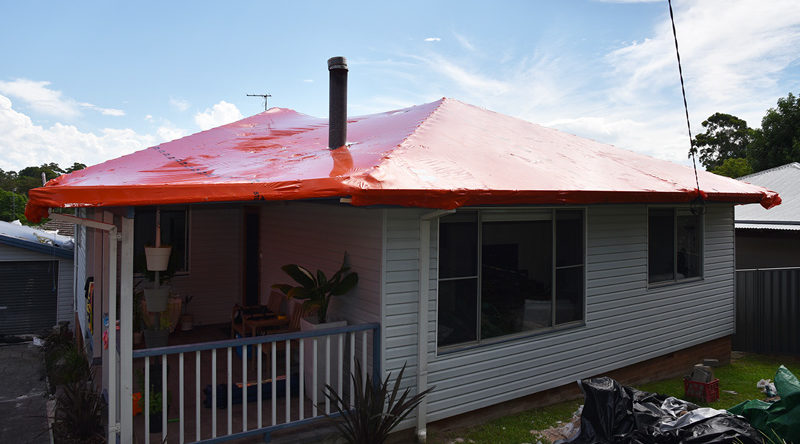 In December 2018, a devastating hailstorm damaged 33,000 properties in northern Sydney. Berowra was one of the worst-hit suburbs.

For Ryan Johnson, the happy arrival of his second child was sadly offset by the damage to his Berowra home. ‘We had water pouring from every downlight.’

Nearby, Sally Edwards was home alone. ‘It was a terrifying experience. Our roof was shattered.’

Every room in David Dobson’s house was impacted. ‘Nearly all our solar panels were smashed… water was pouring through.’

Todd Chapman was on a European holiday. ‘Our neighbour was up on our roof until 3am putting on tarpaulins.’

97% of Berowra homes damaged by the hailstorm were ‘made safe’ by insurers’ builders with tarpaulins. While residents waited for their insurance claims to be processed, they found that life under tarps is far from safe.

‘My tarps flew off several times as more bad weather followed,’ said David. Ryan was also kept awake by flapping tarps and falling sandbags. In the month after the storm, he climbed onto his roof five times to reattach them – and nearly slipped off. Sally’s tarps were replaced eight times in five weeks. Meanwhile, rain leaked in and wrecked her carpets, curtains, blinds, ceiling fans and lights. Todd’s tarps came off seven times in three months, causing ongoing damage and frustration.

Elderly Berowra resident Marg suffered terrible anxiety when the tarp on her roof blew upside-down and caught on powerlines. It was reattached seven times in five weeks.

David was lucky: his insurer installed Stormseal before the New Year. Sally’s neighbours told her about superior Stormseal so she called her insurer to request it and advised Marg to do the same. Ryan also heard about it on the grapevine. Todd discovered Stormseal on the Berowra community Facebook page.

When Stormseal was installed on their roofs in place of tarps, Berowra residents were hugely relieved.

‘You’ve got peace of mind that if it rains, no water is going to come in,’ said Ryan.

‘Tarps and Stormseal are chalk and cheese!’ David said.

‘I want to say thank you very much to the inventor of Stormseal,’ said Marg. ‘And I hope the people who get hit by the next storm get Stormseal instead of tarps.’

‘It was also in the best interest of the insurers,’ added Todd.

16 months after the hailstorm, some Berowra residents were still waiting for permanent repairs and Stormseal was still protecting properties.