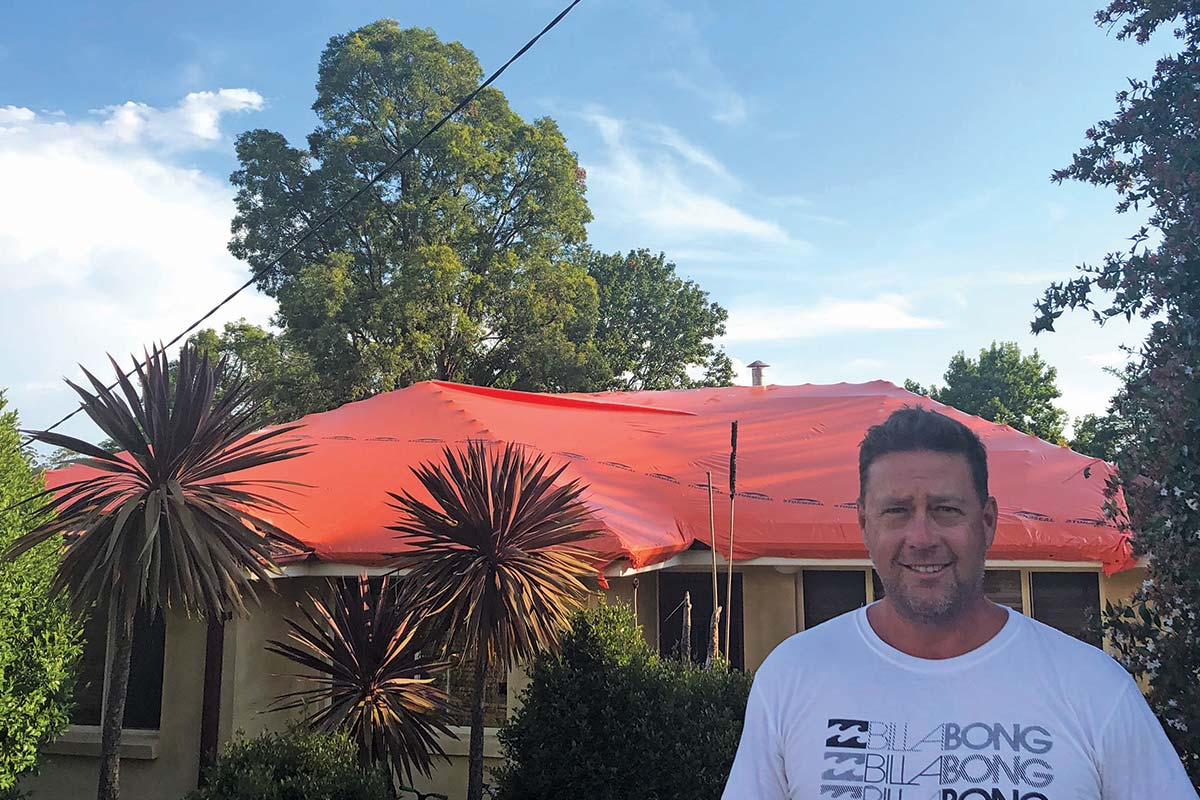 When the catastrophic pre-Christmas hail storm hit David Dobson’s Berowra home, late afternoon on 20 December 2018, he was home with his family and his sister-in-law too. In all, six kids endured the storm that produced hail the size of “softballs”.

His house, which is an older design, endured significant roof damage with hundreds of tiles smashed and every room affected.

“It was a scary afternoon but luckily the kids had been through a large hailstorm before so knew what to expect, but half an hour of the barrage seemed like a lifetime,” David said.

“When the storm came through nearly each hail stone was the size of a softball so the noise was intense and we took shelter in the lounge room, staying clear of the windows, watching it all unfold.”

But it wasn’t long before the damage was evident and hail began to invade David’s home.

“Within five minutes hail was pounding through the roof, the main focus being our new bathroom which had a skylight that got smashed, letting the elements in. Nearly all our solar panels were smashed too and water was pouring through my daughters’ wardrobe like a waterfall,” he said.

When the first storm finally subsided David acted quickly. Using his own tarpaulins, kept for camping, he climbed on the roof and covered most of the damaged areas until lightning and a second storm stopped him going further.

“I had at least got some tarps up and some tiles back on too until I saw the next storm coming and I had to get off the roof, I then got back to the job of emptying buckets filling up rapidly in the house as the rain fell.”

David was lucky with his insurer – Youi – which came immediately the next day and arranged for Stormseal to be installed to protect the damage.

“Although it was booked they couldn’t put Stormseal up straight away and my tarps flew off several times as more bad weather followed, so we kept the State Emergency Services busy as they were the ones who came back to help,” he said.

“Once Stormseal was on though we felt secure and protected, there has been no elements getting in since.

“We feel lucky that our insurer took swift action and had Stormseal on before New Year, which unfortunately was not the case for some neighbours who still have holes in their roofs 11 weeks later. One lady who is 86 and lives alone, has had her tarps fly off numerous times and is still awaiting repairs, it’s sad to see,” said David.

“I do feel secure with Stormseal installed and a lot of the neighbours with damage have asked me about my new orange roof, so explained that our insurer was the one that offered it to us and they should speak to their own insurer to get it fitted.

“So many people have had to have their tarps refitted many times but with Stormseal you know once it’s up it’s there to stay – tarps and Stormseal are truly like chalk and cheese!”