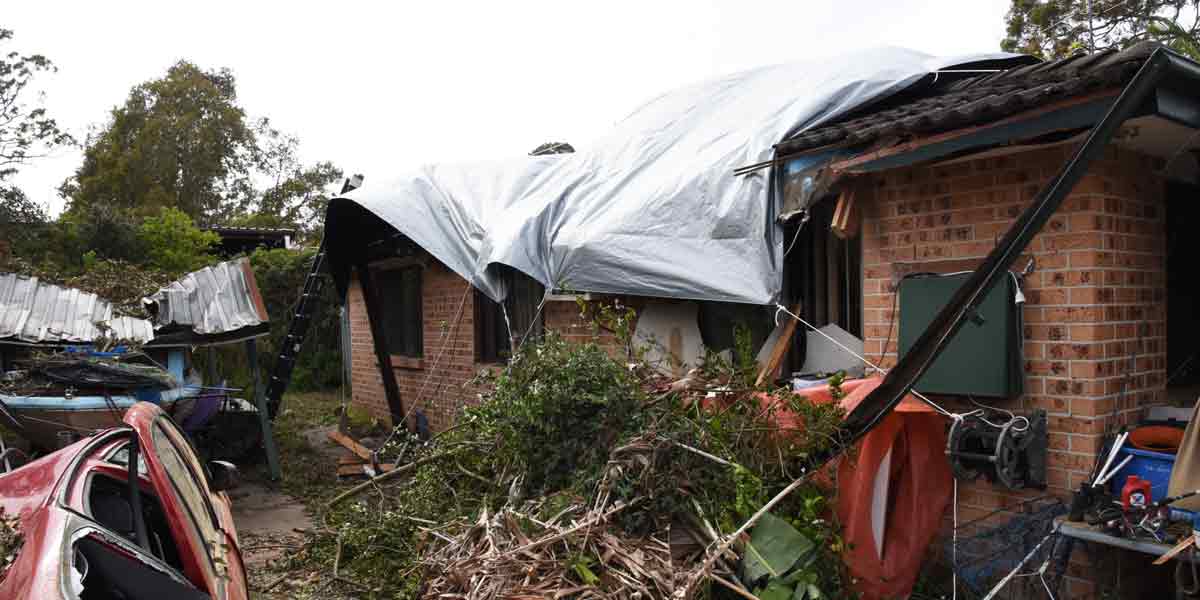 Aside from the caved in roof and mounds of splintered tree branches piled in the driveway, the modest brick-and-tile family home still standing behind Buff Point resident Wilfred could belong to any number of Australians across the nation.

It’s a well-loved house, complete with a boat in the carport and brushy natives in the backyard, and like many Australian homes has now shared the trauma of a storm encounter which destroyed the roof, crushed the boat shed and nearly the took the life of Wilfred’s son Phillip.

“I was in the kitchen, doing some cooking, and my son was out here, just been to the car, and he’s walking away from the car and we’ve just heard this almighty bang. I’ve come outside and Phillip, my son, was just standing 3 or 4 metres away from it. He was very, very lucky that he didn’t get killed.”

While Phillip got out alive, Wilfred’s car wasn’t so lucky. It took days to clear the debris that had covered the roof of his house, and the massive gum tree branch that nearly took the life of his son and left his vehicle crushed beneath it.

Wilfred and his son weren’t the only Central Coast residents affected by the storm that pummelled the east coast of NSW in full force on Saturday October 20th, 2018. While further south the visiting Duke and Duchess of Sussex experienced a milder taste of Australia’s wild weather when effects of the system brought grey skies, rain and wind to the opening of the Invictus games, closer to home the effects were far more severe.

The Wyong State Emergency Services (SES) were called to more than 50 properties in the wake of the event. A number of these callouts required a crane to lift trees off homes. Wyong SES media officer Allan Benson said crews from a far afield as Gosford and Lake Macquarie pitched in to help with the clean up on Sunday. During the peak of the storm at least 10,000 homes and businesses lost power.

Wilfred’s home, like many others, was given the standard ‘protection’ of a tarp to cover the gaping holes in his roof following the storm. But as many survivors of severe weather events discover, Wilfred found no comfort in the precariously arranged plastic sheets.

“It never stopped flapping. It’s overlapped. The eyeholes are spread out. The tarp was tied to the tree that fell. The tree started moving again, I don’t know why. It was very noisy. You were trying to sleep in there where my son was and all you could hear was this flapping and flapping and flapping of the tarp,” said Wilfred.

As anyone who’s experienced roof damage knows, this tarpaulin setup is a far from ideal solution. Tarps frequently require replacement, because they leak, tear, blow off, or collapse under the weight of pooling rainwater. Tarp failures cause further trauma to residents and more property damage, escalating claims and labour costs.These failures were highlighted in a recent Financial Services Royal Commission.

Stormseal is a unique, polymer technology for weather-proofing buildings. It’s a strong polyethylene film that heat-shrinks to cover a damaged roof or wall, providing secure protection from wind, rain and hail, and requiring no further intervention until permanent repairs are made.

After having his home secured with Stormseal Wilfred noticed an immediate difference.

“I’ve got nothing against tarps but this is just a different kettle of fish. There’s no noise. There’s no anything. There’s no way in the world any water’s going to get in that. And it looks good. I should get the whole roof covered instead of the tiles.”

“It can’t blow up. It’d get windy and the tarp would blow up and there’s rain in a storm. It just comes down in all directions. It is possible, with a tarp, that you get water in your house. But you can’t with this. There’s no way, it’s great. Really, Really good…. I don’t need to worry about water now.”

The area is no stranger to severe storms with the NRMA recently releasing a study which revealed the Central Coast as the third most storm-affected region in NSW.

While storm preparation advice from the SES to regularly clear gutters and trim overhanging branches is of utmost importance, Stormseal inventor and Managing Director, Matthew Lennox, says the best advice in the aftermath of a weather event is to ask your insurance company to ditch the tarp and provide Stormseal instead.

“We need to help our communities become more disaster resilient. It’s time we said goodbye to inadequate tarps and made a sealed, secure roof the new standard for how people live in the days of post-storm recovery.”

There is more information available for homeowners interested in Stormseal here.

Stormseal® Named in Fast Company’s Annual List of the World’s Most Innovative Companies for 2020
June 20, 2020
Recent Articles
Go to Top