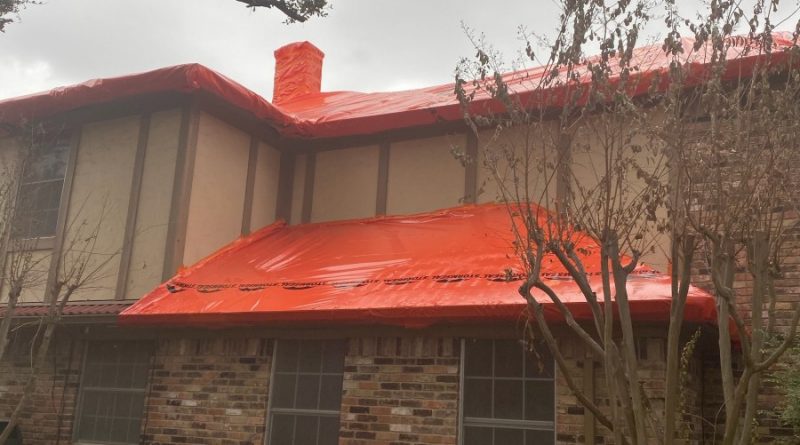 In late 2019, a residence in Richardson, Texas, was victim to a devastating fire that left much of the home in need of repairs, including the roof. As is the case with many residential repairs, the homeowners’ insurance agency needed to first assess the damage to the roof and other parts of the structure in order to proceed with the reconstruction.

The contractors working on the interior repairs were using traditional tarps, but consistent rainstorms were impeding the process and causing costly delays and further damage. The tarps were failing, especially after continued exposure to the elements. The insurance company contracted Orlando Group, Addison, Texas, a commercial and residential roofing contractor that has specialized experience with storm damage and restorations.

After evaluating the project site, Orlando Group recommended Stormseal®, an innovative polyethylene film that heat-shrinks to securely wrap a damaged roof or structure. Unlike tarps, Stormseal stays in place on a roof until permanent repairs can be made, resisting wind, rain, hail, water intrusion, and it is UV resistant and fire retardant. It can last over a year on a structure, which reduces much of the cost, hassle, and stress that can accompany projects that require a longer construction timeline. Stormseal can be heat-shrank to contour to any surface, and it has high strength and tear resistance. In addition to all of its impressive qualities as a protective wrap, it is 100% recyclable.

After installing new framing and small areas of decking to the burned rafters, 4,705 sq.ft. of Stormseal were placed on the entire roof and the chimney. It was a quick installation that consisted of just 2-1/2 days, allowing the team to bypass the storms that had been traveling through the area. “Once we put the roof protection on, everyone breathed a sigh of relief,” said Doug Hasty, president, Orlando Group.

Orlando Group has been a certified Stormseal installer since 2018, and was one of the first United States companies to endorse the Australian invention. “Our go-to used to be tarps, but Stormseal was a perfect fit for Orlando Group,” expressed Hasty. “We only associate with manufacturers who take care of their master contractors and customers.” The installation is quick and streamlined, thanks to Stormseal’s accredited installer training.

Upon arrival at the jobsite, the installer completes a damage report. Then, Stormseal film is cut and tailored onsite to fit the damaged structure. Attachment occurs at the perimeter of the damaged area, meaning that installers spending less time on the roof, which reduces fall risks and installation costs. Finally, the film is heat-shrank to the structure and inspected for quality assurance. When it’s time for removal, the process is fast and easy, and it can be reapplied following a roof inspection.

“There’s simply nothing like it,” said Hasty. “Other products just don’t have the testing or warranty that Stormseal has. Quick fixes bring problems, and we didn’t build our company on quick fixes.” Stormseal allows contractors to continue working without worrying about weather elements elevating the cost of the construction process. Once installed, it’s as though the storm has passed, even if it really hasn’t.