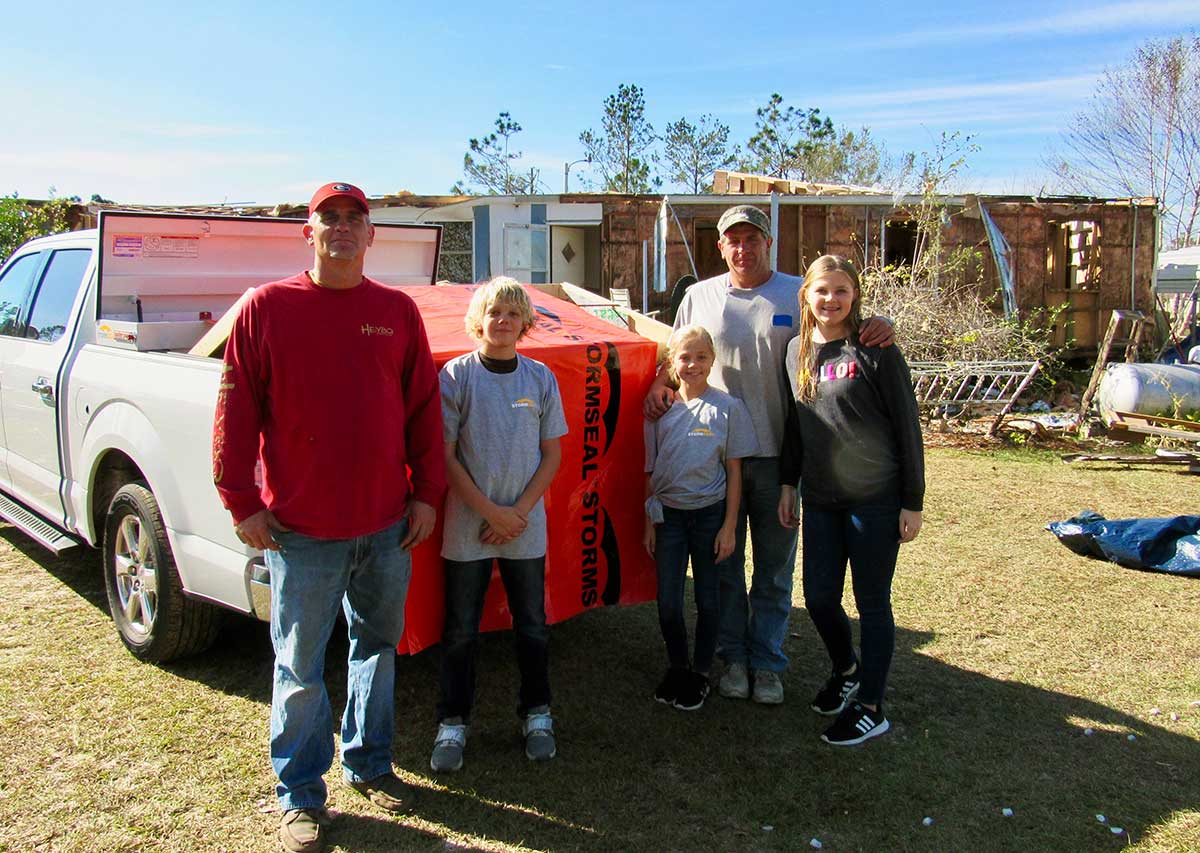 Pictured above: Joe Fletcher (right) along with his three children and his brother Hugh (left).

Hurricane Michael wrought inconceivable destruction on the small farming community of Donalsonville in Seminole County, Georgia. While the municipality lies more than three hours inland from the coast, the mega-storm which made landfall in the early hours of October 10th 2018 had somehow lost almost none of its intensity when 150 mph winds carved a path of devastation through the once picturesque – now barren and windswept – country town later that day.

Joe Fletcher is a local contractor who lives in Donalsonville with his three children, right next door to his parents, and he’s never been more grateful for this proximity.

“I was here, to begin with, but when the roof started coming off we went to my brothers. Thank Jesus my mother and father live next door to me, that’s where we’ve been staying.”

Many of Mr Fletcher’s family, friends and neighbours may be thanking him more than anyone else as the roofing contractor has spent every available moment since the storm hit going from house to house, using tarps to try and protect those whose houses are still standing.

One of Mr Fletcher’s clients had heard through the grapevine about a new make-safe system called Stormseal. After getting the tip-off after a hard day of tarping, Mr Fletcher sent an email to Stormseal managing director Matthew Lennox to tell him his story and ask if Stormseal could help.

Stormseal is a strong polyethylene film that covers a damaged structure, staying in place until permanent repairs can be made. Manufactured from low-density polyethylene resins that are combined with fire-retardant and ultraviolet-resistant additives, the resulting mix forms a strong plastic film when applied on a damaged roof or wall, enhancing the structure’s strength without damaging underlying materials. Designed to replace tarps that often flap, leak and rip, leading to further property damage, Stormseal helps roofers to better manage reconstruction efforts following severe weather events.

Matthew Lennox happened to be less than two hours drive away and moved by the plight of the roofer, agreed to drive to Donalsonville to meet him. He was instantly impressed with the roofer’s spirit of generosity.

“He’d been so busy helping out other people in the community he hadn’t even had the time to think about his property. He’s a good bloke. He’s a good person. He’s lost pretty much the lot but since the storm happened, he’s been out around the clock, helping people put tarps on their roofs.”

Mr Lennox had the opportunity to meet with Joe Fletcher’s family, his mother, father, brother and three children and had a first-hand insight into the impact of the hurricane.

“Joe’s Mother told me she had not had the courage yet to go outside, she simply could not stand the sight of devastation surrounding her property. She said she had such a lovely garden. And she just couldn’t bear to look at the space where it used to be. I asked Joe if he was insured and he said they always talked about it but he never did take it out. “

The Stormseal Director said he was staggered by the severity of the destruction.

“Joe’s house is blown apart. There are trees ripped up all around. He’s lost everything. I heard it was once a serene country landscape, green all over with lots of trees. But when I arrived there was nothing like that. When I turned up, the place looked like it had been napalmed. Everything was dead. Nearly all the houses were damaged. The ones that were still standing all had some form of temporary roof protection.”

Joe Fletcher’s kindness is not an anomaly. News outlets have reported on numerous acts of generosity and neighbourly goodwill with many in the town pitching in to help cut up fallen trees and lend a helping hand.

Matthew Lennox explained to Mr Fletcher the benefits of using Stormseal and how he could register for training but soon realised that he wanted to find a way to give a helping hand to the man who had helped so many.

“Driving home that night I couldn’t believe what I had just witnessed, how displaced the community was and that this was just one story of the hundreds of thousands affected by Hurricane Michael. The next day I rang Joe and offered to pay for his training in Orlando and told him Stormseal would donate a Stormseal start-up kit so he could continue to assist with relief efforts with a greater set of resources.”

“The tarps are going to be on homes for a long time because there have been so many people affected. The tarps will fail. They won’t last three months. Stormseal lasts at least a year, which will give Joe and his community some security and peace of mind while they try to get back into some kind of normality. It’s better to be able to focus on permanent repairs rather than the constant crisis management of replacing blow away and leaking tarps.”

The donation from Stormseal was welcomed by Joe. He said he would take any help he could get to assist in getting his community back on their feet.

“All we’ve done since the storm is try to help out where we can. I believe Stormseal will help a lot, it’ll be a nice tool to have.”

Roofing businesses anywhere in the United States can attend a hands-on, safety-first, one-day Stormseal training program through Optimum Training. Upon completion, they will receive a unique web login to the Stormseal website which will allow them to purchase products online and have them shipped quickly to their doorstep.

Stormseal film is manufactured in the United States, it’s quicker and cheaper than a tarp to carry in a work vehicle and apply, giving contractors the tools to boost the recovery of hurricane-affected communities.

Register with Optimum Training to get your crew trained up, say goodbye to flapping tarps and help Hurricane Michael survivors stay safe and secure while they await permanent repairs.