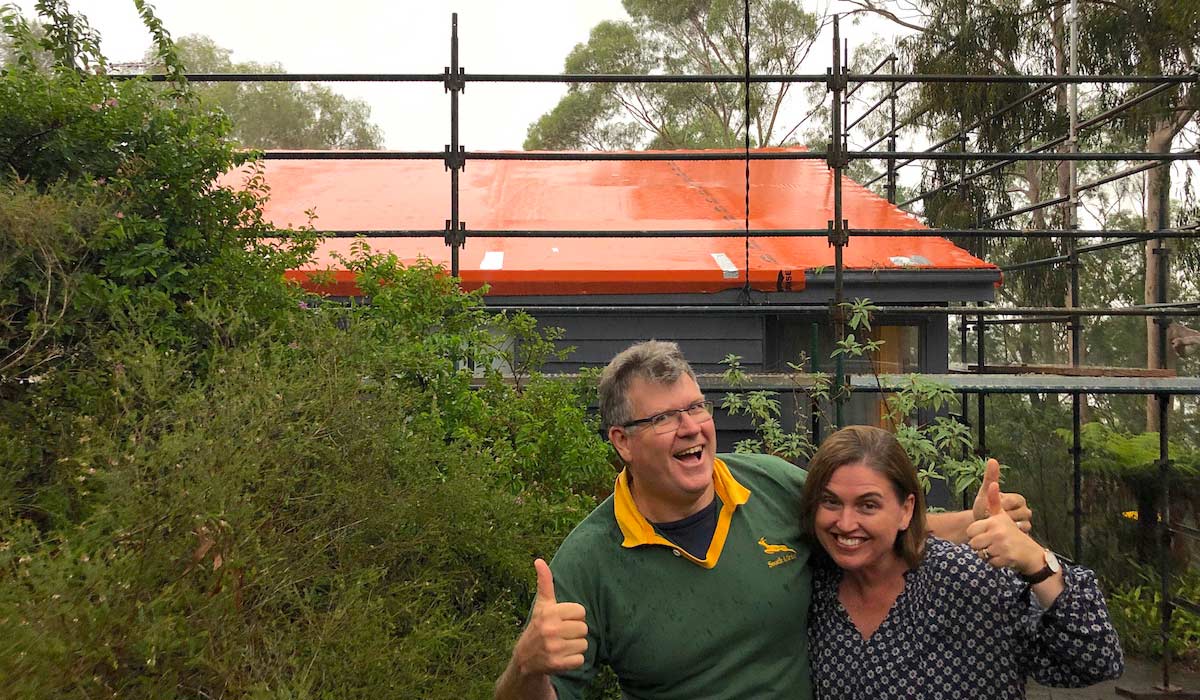 Like many unsuspecting Berowra Heights residents, a massive storm hit the home of Todd and Jo Chapman, their two kids and dog Cody – just before Christmas on 20 December 2018 – the worst gift you could possibly receive at this festive time.

To make things worse, the Chapman family were a week into a five week European holiday, so were not there to make safe their home. But according to Todd this is where his local community of Berowra stepped in, and a true Christmas spirit prevailed.

“We saw the best of the Berowra community at this time who helped secure our home in our absence,” said Todd.

“Our 72 year old neighbour, Pete, was just amazing and was up on our roof until 3am in the morning putting on tarpaulins and helping the SES cover our house as soon as possible. Our community is just like a country town, they really shone through and we are so grateful.

However it was not all plain sailing as the tarpaulins kept blowing off – about seven times in the ensuing three months.

Todd heard about Stormseal via the Berowra community Facebook page where information about this unique Australian designed and born product was being discussed.

“I became aware of Stormseal when we returned from Europe, thanks to the social media chatter on the Berowra Facebook page, and I immediately wanted our house covered because I was sick of the traps being reapplied and the further damage caused. In my view, it was also in the best interest of the insurers for this to happen,” he said.

“I would conservatively estimate that the original damage has now increased by 50% because of the inadequacy of the tarps to stay in place whenever a storm occurs. So Todd arranged with his insurer for the installation of Stormseal. “It’s a no brainer for the Insurance companies to go with Stormseal. The endless re-application of the tarpaulins are a fools pursuit and only lead to more damage and stress. This equates to cost exposure for the Insurance company and frustration for the home owner”

Todd makes some interesting observations between the effectiveness of his experience with tarpaulins against what he is currently enjoying “Stormseal has been described like a shower cap for your house, it tucks under the eaves and gutters, so seals underneath, just like your hair under the elastic of the cap. I like that metaphor, it really works like this!” he said.